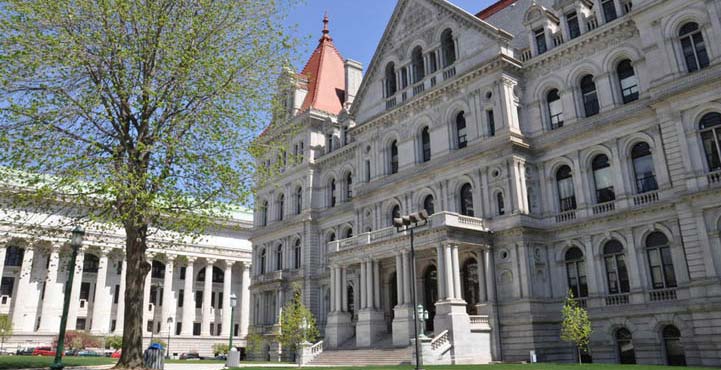 INQUIRE NOW
We have office space for every kind of professional. Contact us today for a tour!

We hate spam too. You won't get any here.

Albany, NY is more than 150 years older than the United States! Henry Hudson stopped near the present location of Albany in 1609 during his exploration of the Hudson River (as he searched for an easterly passage to Asia for the Dutch East India Company) at the spot where the river became too narrow/shallow for his ship, the HalveMaen, to progress farther.

The Dutch East India Company built a fort (Fort Nassau) on Westerlo Island in 1614, which served as an administrative outpost for the company’s Manhattan-based fur trading ventures. The fort was moved around 1615 to land near the mouth of the Normans Kill, which was replaced by Fort Orange in 1623.

Dutch and French Huguenot families soon enough turned the fort into a permanent settlement, later establishing a town named Beverwyck, which later became  Albany when the Dutch surrendered to the British (without a battle) in 1652 (New Amsterdam became New York at the same time). Albany remained under British rule until the Revolutionary War.

The New York State Legislature voted to name Albany as the state’s permanent capital in 1797.

The Hudson River at Albany itself is full of historical sites and venues. The river was critical to the United State’s economy and military might for decades and Albany’s riverfront reflects this.

Visit The USS Slater, a WWII U.S. Naval Destroyer Escort. Don’t forget to stop by the Albany Heritage Area Visitors Center in Quackenbush Square. You’ll get more information on the city’s unique skyline, one that incorporates century-old architecture alongside contemporary showcases such as “The Egg “ (Albany’s Center for the Performing Arts) and other buildings.

The region is close to the Appalachian and Catskill Mountains and so – coupled with the activities found near the Hudson River – provide people with a great variety of outdoor recreation opportunities, including hiking, bicycling, boating, and fishing, as well as skiing, ice fishing, snow shoeing, and more in the winter months.

Albany is easily accessible via plane, train, car, and bus and, because it’s just three hours from NYC, Boston and Montreal, is a great alternative for businesses, allowing companies who set up shop here easy access to these grand cities, but without the high costs.

Albany also is just a short drive from Cooperstown and Saratoga Springs.

If looking for office space in Albany NY, look at 90 State Street. From executive offices to co-working spaces, on to virtual office support and conference room leasing on an as-needed basis, we’re here to help you get business done in Albany! Contact us at 518-694-0662.